Here's the B section from Moignard's Coquette solo. There's some really modern concepts being used here, which give it a little more individuality than a traditional approach alone does. Something, that Moignard fans will certainly recognise.

It starts with what appears to be a superimposed C min into B maj arpeggio over the Am. This is continued into the next bar with the B maj triad continued. This use of minor third based superimpostion is a common contemporary jazz superimposition and is a good one to try reapplying. It can also be moved around symmetrically for an even more out sound. Despite clashing, the strong pull of the triad provides momentum to the phrase and keeps it from sounding 'wrong'.

Over the G, rather than treating this as a I chord, Moignard implies lydian by using a A major triad over the G (giving the #4). The take home here - Try playing major triads a tone above when resolving to a Imaj for a lydian sound.

The next bar seems to revolve around a G# m7b5 arpeggio. Considering this bar as Bm7, this is a common tonal substitute - Taking the ii (Bm7) and playing a m7b5 a tone a half down (or three frets). This is another useful way of moving away from outlining chord tones only.

The E7 following uses yet more substitution, this time a tritone sub (Bb against the E7).

Lastly, Moignard appears to push the entire A7 bar to the Em7, using an A7 arpeggio idea, landing on the b5 of the A7 to conclude with in the following bar, again pursuing a tritone substitution.

While this section does seem to be quite harmonically driven, The rhythmic ideas are great too. The seemless switching between triplet quavers and quavers is hard to pull off, but Moignard does so with ease. as a practice application, trying to recreate this switch between rhythmic groupings will help develop more interesting rhythmic lines. 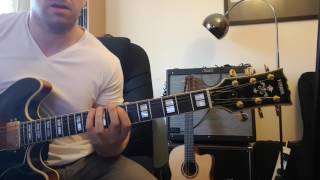 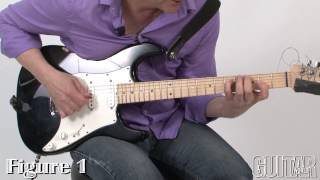